An Open letter to Indian Cricketer

The passion of Cricket in India is so high that Cricket in India is almost taken as Religion. We not only watch them but we also follow our stars. After all, who don’t want to be as successful like them? Thanks to one of the most successful sporting generation where the stars like Ganguly, Dravid, Laxman and Tendulkar have made huge difference. Their charismatic performance brought the game in golden era which has made cricket popular more than ever before. Today while they play to bring another world cup back to home, I would like to pass my small letter to these star who have made the difference in society hoping they will keep this spirit for many moment to come. 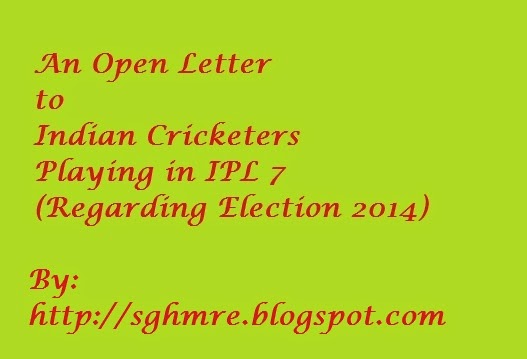 Firstly I wish them all the best for World Twenty 20 final.

Let me talk about IPL! Yeah, It is fascinating. We all enjoy watching it. I have been following this version of Game since the first edition supporting Mumbai Indians. The reason, I love to call myself as Mumbaikar for the beautiful seven years I have spent in this city though I am Nepali citizen. My favorite player, No prize for guessing. He is the man whom I have admired since I know cricket.

The entire edition of IPL 2 was shifted to South Africa because of the election. While closely watching IPL and players, one of the thing disappointed me the most and it might be repeated same when IPL and elections are ongoing at same time. Let me tell you more about it.

While IPL 2 was going on in South Africa, in my best knowledge, most of the players remained in South Africa exempting themselves from exercising their duty of voting for the 2009 Lok Sabha Election ( I am sorry if I am unaware about any such provision which allows them to vote from foreign land itself which I am not aware of). For me, the most disappointing was by my best players. On the day when there was an election in Mumbai constituency in 2009, they were playing match in South Africa. There might be many other players who might not had voted in 2009 including the players from Indian National team. I wondered, didn’t they even think once about voting? Didn’t they think about millions of people who were following him?

This year, while partial of IPL is shifted to UAE, similar things is happening. The IPL 7 starting on 16th April won’t be bothering about election when they are abroad. While Mumbai will go on poll on 24th April, Mumbai Indians will be playing their match against Chennai Super kings on 25th April. This means few Mumbai players will be missing match unless they are really determined to vote. During 15 days of away fixture, many cricketer might be exempting from this duty.  IPL governing body may not had thought about the same, but cricketer should have.

It’s not that their one voting can bring the major difference. But when there are millions of people following them, their preference to IPL (which comes a year) over election (which comes once in a five year) is being noticed by most of the youth. In the country where we have voting turn of youth remarkably less, I believe many thing can change when a cricketer says to his fan “I’m going to vote today, are you?” But if they themselves abstain from voting, how can we expect normal people not to make any excuse?

There are the moments when we can inspire youth for betterment of country, and if this happens it will be widely noticed by youth. It can be the talk of town. Still, either they vote or not, either they ask people to vote or not, election will go on, and generation by generation their work will be noticed. Just a small difference, how do they choose to tackle this challenge! 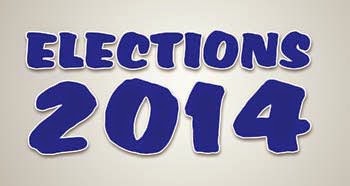