Most of the student visiting  Europe/America for study look for a part-time job more than any other. Because of their need, many students fall prey to scam losing their money what they had. This looks a very old fashioned scam, still, hundreds of people are an easy victim. Although this scam is more about an incident in Europe, they may occur in some or other way in the rest of the world.

Thankfully, I got saved.

As scammers focus on students who are not familiar with the European banking system, I hope this mail will reach to all newcomers student in Europe. This happened in France.

Had I not known about such a scam, I too would also have been an easy victim. As I was in the need of a part-time job in November 2018, I posted a free advertisement in leboncoin. In a day or two, I got one mail which reminded me about an incident that happened with one of my friend in August 2018.

Mr. X, from Nepal, actively started looking for a part-time job when he came to France. He posted his contact details in an online site where he got a very good response from a family. In the initial conversation, he was told that they would offer him a job to teach their kids. He was happy to receive such an easy offer. They asked him for his CV and residence address. He shared it.

Within two days, he got a cheque of 1800 Euro in his address. In the following email, the family told them that they are in the outside city and they urgently need to pay some rent to their room owner. Among a total cheque of 1800 Euro, 300 Euro was for his advance payment and remaining 1500 Euro he had to transfer to a room owner of family. Although he was hesitant initially, he submitted a cheque to his account which got credited in no time. He was asked to transfer the money through Tabac coupon. He did. He was waiting for their arrival but there was no contact after that time. All the communications till date were done through the mail.

After a week, his bank informed him that the cheque he had deposited got bounced and he needs to submit money he had withdrawn. He was shocked to hear that. He followed up with bank and police but everything was against him and he had to pay money as well as bank fees of a dishonored cheque. Possibility of tracing that money was impossible and he lost his valuable money in no time. To see money deposited in his bank account was a factor which made him lose money as he was not aware of the French banking system.

In the city I live, I myself heard the other two cases in my friend circle where a student was scammed similarly. The money amount, nature of the job and few other might be different but their pattern will be similar. Many such cases keep repeating every year and many students lose their money which they brought from their homeland.

The confusion is Banking System of France/Europe:-


I am not sure whether this is a case with all bank or only limited bank, but this was major confusion. A cheque that victim deposited got credited without verification of cheque owner. So what people thought is that they got money and a person who is offering them a job is real. That cheque may be a random cheque by any other innocent person, or cheque might be of any closed account. By the time that victim was informed that cheque was fraud, a criminal is already full of money and out of contact.

How I got saved:-

After I got mail for part-time job offer, I got reminded of a similar incident. So I decided not to reveal my home address and phone number. I put the mail screenshot for you.

I gave a simple reply as

As they were writing in French and I thought to write in English, I wrote as


Hello.
Is It fine we speak in English?
I am available on Sunday. I can supervise your child on Sunday, Wednesday and Friday. (Or kindly let me know if you propose different time). My medium of instruction will be English.
When can I start teaching? Kindly give me your address.


Though I had not written any such good detail, they mailed this way. 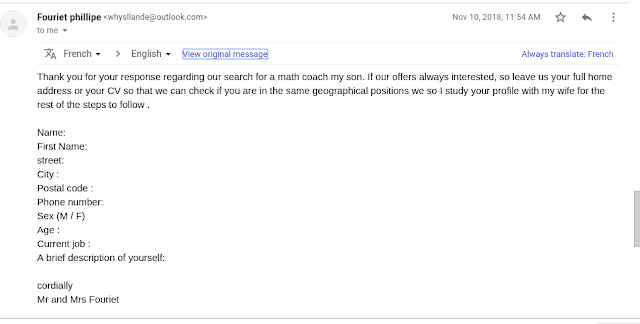 As soon as they asked me for my resident address and Mobile number, I had more confidence that it is a scam. It is because the moment you sent your residence address, they will send you a cheque (yeah, even without you asking for it because they are scammer). So, choosing not to give them my number and address, I replied as:-

After this reply, they stopped mailing. But this process didn't stop. I got a similar mail from another person with a similar kind of job offer.

This cycle kept repeating again and again till the time they realized that I am aware of the scam and hence it stopped.

How to deal with such a scam?

It is ok to search for a job online, it is ok to contact people but it is not ok to be scammed. So if you want to save yourself from any of such scam, kindly note:-

1) Do not give your residential address, mobile number, and RIB to anyone in such mail.
2) Even if you give, do not deposit any incoming cheques to the bank.
3) Do not transfer any money in the form of coupons or in any such method.
4) Observe carefully pattern in emails, How you have replied and how you have been answered.

If this mail saves even one person from such a scam, I would feel my mission accomplished.
Kindly be free to share it in your circle through facebook and twitter.

And if you ever had any such encounter, Make sure you do not forget to share them in the comment section.

Thank you for your feedback.